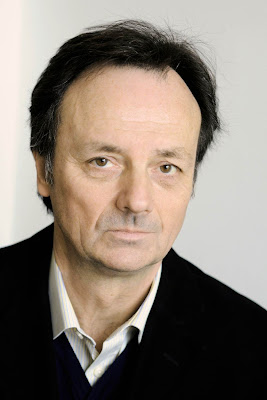 "I was first approached to do it in 2002 I think. (...) I couldn't say Agatha Christie was very high on my reading list. I thought I was much too much of an intellectual for that. I'm now prepared to accept that I might have been too much of a snob because after a dozen years of being associated with the shows, because I have written six of them now for ITV, I think it's very classy entertainment and I'm pleased to be associated with it." (Huffington Post interview, 2013)

Nick Dear (1955-) wrote six adaptations for Poirot between 2003 and 2013. Outside of Poirot, he is known as a BAFTA-winning script writer (for Persuasion, an adaptation of Jane Austen's novel, in 1995). He has also written biographical TV movies on Byron and Beethoven. In 2011, he adapted Mary Shelley's Frankenstein for the stage, directed by Danny Boyle and starring Benedict Cumberbatch and Johnny Lee Miller (the two Sherlocks!). In other words, he was no stranger to literary adaptations when he was asked to adapt Christie's novels.


"Nobody ever grieves for a minute in Christie; 10 seconds of grief, then it's onto the next murder. What we've done with them in the last 10 years is make them rather darker, existentially bleaker, and have Poirot faced sometimes with very difficult moral choices" (Huffington Post interview, 2013)


Dear's first episode was The Hollow, for Series Nine (2003-2004). I know opinion is divided on whether this is a successful adaptation, but I'm rather fond of it. The novel is complex, in the sense that there's a lot of internal monologue. Dear elegantly balances the melancholy with the humour, the seriousness with the eccentricity of our central character. As the quote above shows, Dear's adaptation and that entire 2003-2004 series was the beginning of a new development in the series. I'm one of the supporters of this move. The difficult moral choices would resurface in his last adaptation, not to mention in Murder on the Orient Express and Curtain, adapted by Stewart Harcourt and Kevin Elyot respectively.


"In most of the stories, the proposal is of a world that we recognise in which people behave appropriately and politely, and then very quickly discover that beneath that surface there's all kinds of mayhem." (Huffington Post interview, 2013)

The above quotation could describe several, if not all, Dear's episodes. It also helps to explain his changes to Cards on the Table, which was his next adaptation, for Series Ten (2005-2006). The adaptation certainly centres on mayhem beneath the surface. I think most fans consider this adaptation a deviation too far from the source material. The episode is faithful and almost perfect up until the last half hour. I'm all for updating stories for a modern audience if it's done in a clever and almost unnoticable way, but the added gay subtext just doesn't work here, even if it provides a somewhat understandable motive for murder. Look to Five Little Pigs for an example of when a gay subtext really works.

However, I enjoy the rest of the episode so much that I'm inclined to excuse this peculiar plot change. He writes brilliantly for Suchet and Zoë Wanamaker as Poirot and crime writer Ariadne Oliver (which is probably why four of his six adaptations are Ariadne/Poirot novels).


"There's been a stipulation from ITV, who always produces it, they're always set in the 1930s. So no matter when they are written, we have to set them in the late 30s, just for that style thing that people like so much." (Huffington Post interview, 2013)

Dear's third adaptation was Mrs McGinty's Dead for Series Eleven (2008). As mentioned, Dear really makes the friendship between Poirot and Mrs Oliver work. Of course, a great deal of praise should go to the actors, but Dear manages to condense the novels and make changes without losing out on the excellent chemistry between both the characters and the actors. Once again, the theme of secrets beneath the surface is prominent, and Dear effortlessly shifts the setting from the 1950s to the 1930s (see the quote above).

Three Act Tragedy was Dear's next adaptation, for Series Twelve (2010). Like all (but one) Dear's scripts, it stays remarkably close to its source material. Dear manages to convey the theatricality of the plot as well as the darkening of Poirot's character (as a result of the added friendship with Sir Charles). The more I think of it, Dear is truly the main representative of the change in atmosphere and character study that occurred in the later years of the series.

"To a degree we are looking to 'modernise' the glamour of the story if you like. Not to update it. (...) I say modernise, I don't mean update the story, I mean update the grammar, and sometimes the pace. (...) It's trying not to make them look dated. They are all set in the 1930s, but we try and keep them at the speed that we like to watch TV now." (Huffington Post interview, 2013)

Elephants Can Remember, Dear's seventh adaptation, for Series Thirteen (2013) must have been a real challenge. It was the last Poirot novel Christie wrote, and that shows. I think the adaptation is reasonably successful. The novel is very slow-paced and rather chatty. That wouldn't do for a modern audience, as the above quote shows. It seems Dear's solution was to add the second murder investigation into the Willoughby institute, and that works surprisingly well. Most of the episode is carried by the excellent chemistry between Poirot and Ariadne, however. But the episode is surprisingly faithful, considering the circumstances.

Dead Man's Folly, for Series Thirteen, was Dear's final adaptation. It's his own favourite, as stated in a recent interview, and I'm inclined to agree with him. It flows well, it has some excellent actors and an unbeatable location. Not to mention the fact that it underlines Poirot's evolving morals, seemingly 'allowing' and approving of a murder-suicide - and that's a long way away from the 'I do not approve of murder'-Poirot from the first series.

His last adaptation is perhaps also an example of how Dear, for the most part, was gently modernising Christie's stories without making it seem to obvious (as always, Cards on the Table is the notable exception). The Hollow is 'sexed-up' with a very modern sex scene, but that doesn't intrude on the story and occurs is the result of an embellishment rather than a change to Christie's original. Mrs McGinty's Dead plays up the 'mainiac/weirdo killer' element of the murderer's character, but that's arguably a reasonable interpretation of the character. The same goes for Three Act Tragedy, and to a certain extent Elephants Can Remember. We are used to serial killers, psychopaths and maniacs in our modern crime dramas, so it's no surprise that Dear and the team decide to emphasise those elements in Christie to keep up with its audience - for better or for worse. Dead Man's Folly, finally, emphasises the difficult moral dilemmas in the subtext of some of Christie's later novels, and the later adaptations, but without stretching the source material too far.
Posted by Eirik at 12:07