The new apartment has been criticised by many fans, primarily because of the discontinuity between the two. As a viewer, one might ask the following questions:  1) Why was there a need to create a new apartment? 2) Why are both apartments situated in Whitehaven Mansions?, and 3) Why do they look so different?

I will try to answer these questions in due course.

Initially, though, I would like to draw your attention to the following paragraph in the current Wikipedia article on the television series. The article seems to suggest that the new apartment is a part of a significant 're-imagining' of the Poirot and Agatha Christie brand:

‘Following the launch of the ITV series Agatha Christie's Marple in 2004, the Poirot series was retitled Agatha Christie's Poirot. The previous titles and theme music were dropped. The visual style of these later episodes was noticeably different from earlier episodes: particularly, austere art deco settings and decor, widely used earlier in the series, were largely dropped in favour of more lavish settings (epitomised by the re-imagining of Poirot's home as a larger, more lavish apartment)’

As the article accurately points out, Poirot’s home is now a ‘larger, more lavish apartment’. But in context, the description feels more negatively charged than I think is reasonable. In this post, I hope to convince you that there are, in fact, several reasons to prefer this apartment to the first one (if one of them has to be seen as "better"), and that there is a sense of continuity between the two apartments, both in terms of layout and design.

Let us return to the first question – why was there a need to create a new apartment? I think there are several possible answers to this. Firstly, I think the Wikipedia article is partially right in claiming that it has something to do with the new direction of the Agatha Christie brand. The new producers (post-2004) seem to have made a conscious decision to distance themselves from the previous series; these adaptations should be considered as independent feature-length films rather than episodes from a television series, and therefore a ‘more lavish’ apartment seems appropriate. (see more after the jump)

The Apartment in Text and on Screen: Christie v. TV series

As anyone who has read my other blog – The Chronology of Agatha Christie’s Poirot – would know, I have already researched this topic quite extensively. There is a separate page on that blog which gives you a bunch of screenshots of Poirot’s apartment, both in the earlier and later years of the television series.

In this post I aim to go a little further. As I was reading Anne Hart’s fantastic biography of Poirot, I came across a chapter on Poirot’s domestic life. This made me consider how faithful the series production designers have been in terms of Poirot’s flat. Many (if not all) aspects of Christie’s descriptions are retained in the two flats.

(I also want to explore the continuity between the first and second flats – and how the changes made in his second flat are more reasonable than one might at first expect. But I will come back to that in a later post.)

All quotations in this post will be from Christie’s descriptions as quoted in Anne Hart’s book, unless otherwise stated.

First, the building itself. Hastings describes Whitehaven Mansions to us as he returns for a visit from Argentina in The ABC Murders:

‘I found him installed in one of the newest types of service flats in London. I accused him (and he admitted the fact) of having chosen this particular building entirely on account of its strictly geometrical appearance and proportions’ (p. 179). 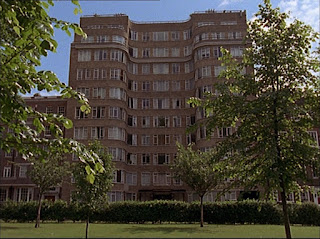 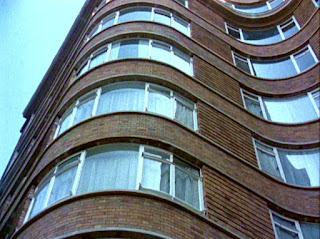 This would obviously be an accurate description of Florin Court as well, the building that was used for the TV series. Florin Court is certainly 'geometrical' in appearance – though I suspect Christie envisioned one