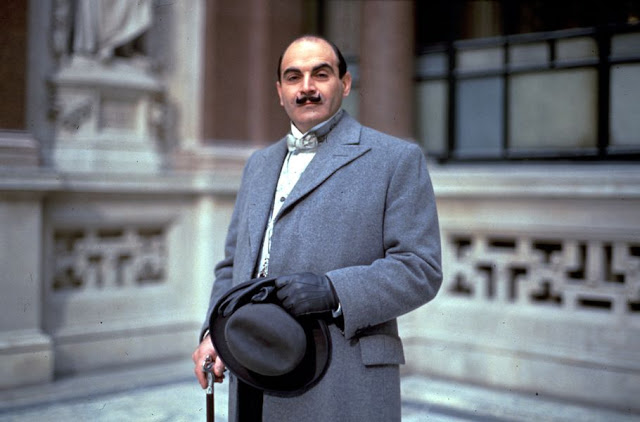 I have been wanting to write this little piece in praise of David Suchet’s achievement for ages, but I have put it off because I have wanted to wait until he has done all Christie’s stories. Well, now I have decided that I simply can’t wait any longer – I will write it now, without having seen the final series. In fact, I think this is a fitting moment to forumulate my thoughts, simply because Suchet has just started filming Curtain, thus initiating the final year of filming for the series, after which he will have done all the stories and portrayed the character on screen for no less than 25 years!

David Suchet’s achievement with Agatha Christie’s character cannot be praised highly enough. I am still baffled by the fact that he has not received a BAFTA award for it! (Yes, he was nominated in 1991, and the series won four BAFTAs in 1990 for Best Costume Design,  Best Graphics, Best Make Up and Best Original Television Music, but Suchet has never actually been awarded one for the portrayal of Hercule Poirot!). I sincerely hope he will at least receive a new nomination once Curtain has been shown on television. He certainly deserves it.

To me, David Suchet is one of the best character actors of our time. His approach to his characters is so detailed and refined. If he is playing a real person, he studies this person’s life inside and out (e.g. Sigmund Freud and Robert Maxwell). If it is a character in a play, he goes back to the original words of the playwright (e.g. Iago, Joe Keller and James Tyrone). And, as with Poirot, if it is a writer, he goes back to the novel(s) and attempts to portray and interpret what the writer has intended.

When asked, in an interview in 2001, to describe the process he goes through when approaching a particular role, for instance Poirot, Suchet explained: ‘You go to the book. With Poirot I had over 60 or 70 stories to draw on, so it was a far greater chance for me — or for Agatha Christie — to develop the character. […] When you’re doing characters from famous novels, you have a responsibility as an actor to make it what the writer intended. And then you add and expand from there to create a three-dimensional performance.’

In my mind, his main achievement with Poirot is exactly what he describes above: He has managed to bring a character to life that, for many, borders on the line of an absolute caricature, a cardboard cut-out (at least judging from pre-Suchet film and television portrayals). Not only that, through adaptations where changes have been made to the stories, he has managed to stay true to the character, to Christie’s creation, while still making it his own three-dimensional interpretation. As he put it in an interview with ITV.com in 2010: ‘I don’t have any say about where the adaptations of our stories may move, but I do have a say in how I play the character. And the way I play the character will be absolutely as near as I can possibly get to the tone, the flavour and, also, particular incidents that Agatha Christie will put in that particular novel. I am still the servant of my creator’.

(As to the particular incidents, a glimpse of his devotion was referred to in an interview: ‘When he compared the [Murder of Roger] Ackroyd script to Christie’s novel, he noticed the TV version omitted an early scene in which Poirot has a frustrating moment with a zucchini in his garden; Suchet asked for it be added. It was.’)

MORE AFTER THE JUMP!

A reader of the blog, Ian, sent me these photos of Art Deco items from Poirot's flat that he has been able to get hold of (see below). I am impressed by the work he must have put down to track them down and very grateful that he has given me some info to post on the blog. The descriptions below are from Ian:

Stylized Doves by Artist Le Jan (French Art Deco)
The ‘Doves’ where often seen in Poirot’s first apartment. I recall seeing them mostly in the hallway/reception area displayed on a black/chrome table. They measure 18inches across and are ‘light cream’ in colour, their glaze finish is called ‘crackleware’ which was very popular during the 1930’s Art Deco movement.  Poirot or should I say the ‘Production team’ seemed to think this style of ceramic would be well liked by the character (and I tend to agree).  The new apartment has even more examples of ‘crackleware’ in the form of more animals and other objects, many again in cream or turquoise. 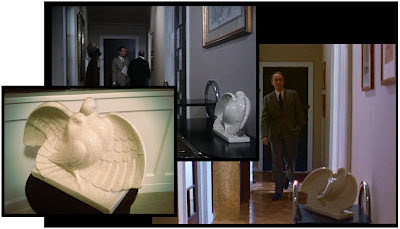 Poirot’s Microscope (E.Leitz Wetzalar)
An almost identical replica of the Microscope is in the episode ‘Murder in the Mews’, the scene shows Poirot dictating a letter to Miss Lemon and he’s seen pacing his apartment’s sitting room area correcting minor errors in the alignment of his books and ornaments and arrives at his Microscope correcting the tilt of its mirror.  Although not Art Deco in its design it's still a wonderful period object dating back to the early 1900’s. 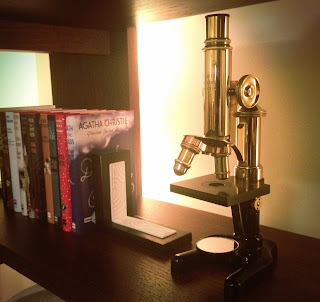 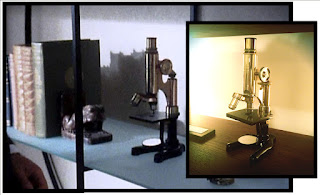 Art Deco Bankers Lamp
The electric ‘bankers-lamp’ sits on Poirot’s desk throughout all 1-5 series. One unusual point about the lamp is that it’s covered with an unusual clear coat finish, which makes the lamp appear to have a gold sheen in some light and then can appear more sliver in others and I have noticed this effect with its on screen counterpart. Most bankers lamps also have an adjustable shade but this lamp instead has a sliding grill/filter which moves up and down by hand to enable the user to control the brightness of the light. 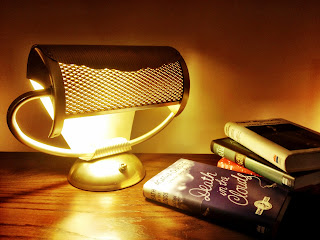 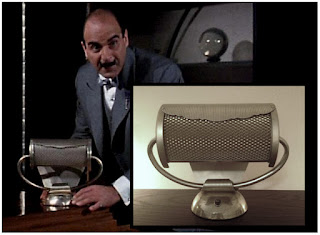 The Apartment - Another floor plan

A reader of the blog, Ian, sent me these detailed and very accurate floor plans of Poirot's apartment (see below). They are so much better than mine (see previous post), but we do have the same basic idea in terms of rooms and layout. The most difficult room to place is the kitchen (as I have discussed before). I do, however, find Ian's suggestion somewhat more likely than the one I have suggested. 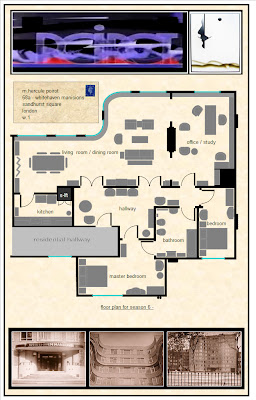 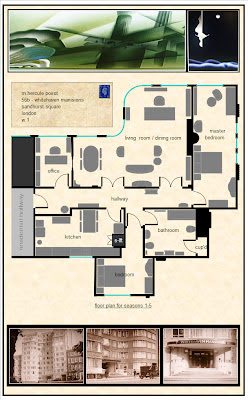