I thought I might share some of the web sites I regularly visit for news and insight on the series. I will add some more later, as I reach specific topics of interest:

The official Agatha Christie website - obviously a great starting point if you want information on Agatha Christie and her stories. They also have a reasonably active Community and a good 'News and insight' section, including so-called Christie papers (which look into different aspects of her stories and the adaptations) and the 'blog' of Mathew Pritchard, Agatha Christie's grandson.

The IMdB page - an active forum, where people discuss different aspects of the series. If you are looking for reviews of the episodes, this is also a good place to start.

David Suchet's Twitter - yes, the leading man is surprisingly active on Twitter. Some of the news he has posted so far: Filming of the final series will start in mid-October, script development meetings are taking place, Hugh Fraser (Hastings) is very likely to return, Pauline Moran (Miss Lemon) is more uncertain (and if you ask me, much as I love her character, that's a good thing, as anyone who have read my thoughts in the Poirot chronology would know!). So this is certainly a place to check once in a while if you want up-to-date information.

David Suchet - Fansite - Danish David Suchet fan Sanna is the mastermind behind this website. Full of information on Suchet, including lots of interviews and stuff on Agatha Christie's Poirot. She is usually very quick to post important news on the series.

David Suchet - Unofficial site - this website, created by Russian fan Daria Pichugina is absoluitely amazing! Loads of interviews and up-to-date info on both the series and Suchet himself.

ITV Press Centre - the place to go for news on the new episodes, including principal photography (when they start filming).

Mammoth Screen - the current production company of the series (and a lot of other UK crime series). Their Twitter is also a good place to stop by every once in a while (if you're interested in news of the production).

UPDATE: I just have to add one more - since I never seem to get around to adding a separate post on reviews and such: The Agatha Christie Reader. This is a jaw-droppingly fantastic site with insightful and detailed reviews of Agatha's stories, as well as almost every adaptation ever made of her books (including, of course, all the Poirot adaptations).
Posted by Eirik at 12:53 7 comments:

Email ThisBlogThis!Share to TwitterShare to FacebookShare to Pinterest
Labels: links

In 2010, ITV (the UK channel that airs the Poirot episodes) commissioned a digital restoration company, JCA TV, to restore the first six series, using the original film negatives. A featurette explains how it was done and showcases the results (see vimeo.com/30227200 & vimeo.com/36075598). The result is astonishing: 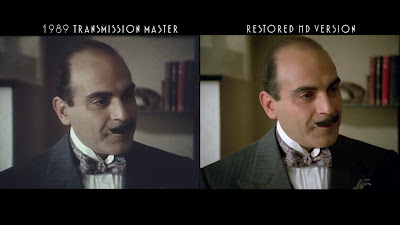 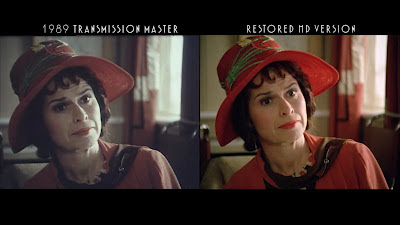 Of course, these screencaps aren't even in HD (or Blu-ray, as the final release almost certainly will be); they are only compressed elements in a video on Vimeo. Still, you can clearly spot the difference between the transmission master and the restored film. (Both of these examples are from 'The Adventure of the Clapham Cook', the very first episode, shot in 1988).

Series 1-4 have already been released in the US and Canada by Acorn Media, and Series 5 is scheduled for release in late June. I recommend the reviews from Blu-ray.com: http://www.blu-ray.com/movies/Poirot-Series-1-Blu-ray/32957/#Review. This is also a good place for fantastic high-quality screencaps from the remastered episodes. Here's an example, in comparison with one of my own screencaps from the previous DVD releases: 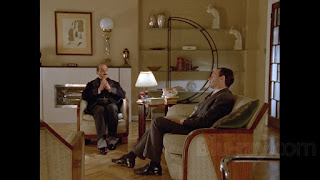 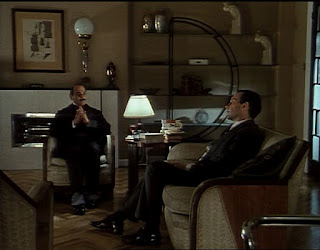 For the rest of us, let's hope the wait for these astonishingly improved films won't be too long... (I would make a guess at a 2014 release for ITV's complete box set). 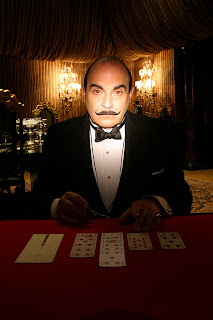 Hello there, and welcome!

This is a spin-off blog from poirotchronology.blogspot.com. I decided to create a second blog to enable posts on all aspects of the ITV series Agatha Christie's Poirot.

My goal will be to provide a place for fans to visit and get in-depth analysis and information. It is not my intention, at this point in time, to concentrate on writing reviews of episodes and episode synopses, since this has been done so brilliantly by other bloggers. I will instead try to provide links to stuff around the Internet that I think might be of interest to fans. I might also be adding some photos, some extracts from interviews, some thoughts on different aspects of the episodes etc.

Right now, this is very much at a planning stage. I'm not even sure if I will be able to find the time for such an enormous project. But we'll give it a go. Stay tuned for more updates. I hope to have my first proper blog post up by the end of the week.