The Future of Poirot (and Christie), Part Two 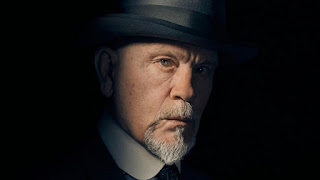 Back in 2014, I did a blog post with the title The future of Poirot: 'Introducing Poirot for a new generation'?. Given that several years have passed since then, I think it is time to get back to the projects I mentioned and see what has happened in the intervening years - and what we can expect in the future.

All except Partners in Crime were adapted by screenwriter Sarah Phelps, in what was collectively branded as 'an exploration of the 20th century through Christie's stories', spanning from the 1920s (Witness for the Prosecution) to the 1960s (The Pale Horse). The public reception varied, with And Then There Were None being the most widely praised by fans, critics and regular viewers alike. Other adaptations were criticized by many for their "modern" approach and somewhat free interpretation of the source material. Personally, I am very supportive of the concept and vision behind these adaptations. Phelps tried to explore societal change in the 20th century through the lens of Christie. That is a fascinating approach to adaptation, and a clever way of keeping Christie adaptations relevant to new readers and viewers alike. I do have several complaints, though, particularly the depiction and change of Poirot's back story in The ABC Murders, but that should not detract from the audacity of the creative vision. Unlike many other fans, I became interested in Christie's work partly because her fiction indirectly (sometimes directly) reflected the social, political and cultural issues of its time: Poirot's refugee status, the British class system, British colonies, women's position in society etc. To see adaptations that try to bring this element of her work to the fore has been a fascinating journey, both good and bad.

The less said about Partners in Crime, the better, I think. It should have been a great success. The timing felt right for a new approach to Tommy and Tuppence. Many fans, including me, were hoping it would herald a new age of Partners in Crime, with several series of adaptations. But it was not to be. The casting was wrong, the approach to the stories didn't work, and the viewing figures weren't good. So one series of two adaptations, The Secret Adversary and N or M?, was all we got.

The film adaptation of Crooked House came a bit out of nowhere for me. I had heard about it being in development, with a script by Julian Fellowes (of Downton Abbey fame), Time Rose Price and Gilles Paquet-Brenner, but somehow its release had completely passed me by. I have to admit I enjoyed both the cast and the adaptation, despite the changes that were made to the story.

Now, Murder on the Orient Express was an anticipated release. I will hopefully get back to that adaptation in greater detail in a later post. Suffice to say I was hesitant to accept a new actor approach the role of Poirot, albeit an excellent one such as Branagh, so soon after Suchet's run. I can't say he even comes close to the character of Poirot for me - there are simply too many action-packed scenes and uncharacteristic behaviour for me to be convinced.... However, I must admit that I am somewhat impressed with the attempt to update Christie for a "contemporary audience", with diversity casting, different pacing and Hollywood-level production design. I also enjoy the fact that the screenwriters seem to be borrowing character names and elements from all of Christie's canon. We'll see what the much delayed adaptation of Death on the Nile, scheduled for release on February 11th this year, will bring to the table.

I have to admit that I am usually critical of Christie parodies and pastiches; they rarely succeed. Knives Out, however, is absolutely brilliant. Written and directed by Rian Johnson, the film is its own thing, completely separate from Christie, but it is so clearly and lovingly inspired by her plots that you would be forgiven for mistakenly assuming that it is an adaptation. The most interesting aspect here, to me, is that the film, soon to become a franchise, demonstrates that it could be possible to adapt Christie in a modern-day setting (more about that later). Knives Out exists in a world that is clearly present day, but also has some timeless qualities to it, almost like a Wes Anderson film. I think a present-day Christie adaptation would be very interesting. As long as it avoids the pitfalls that Murder on the Orient Express (2001) found itself in. That film should be deleted from film history, quite frankly. In any case, I am eagerly awaiting Knives Out 2, scheduled for release this year.

I was beyond skeptical to learn that the Christie estate had asked the (admittedly brilliant) crime writer Sophie Hannah to write a new Poirot novel (with three more to follow, and counting). After all, Poirot is dead. Christie wrote Curtain in the 1940s partly to avoid what her family now had agreed to - a continuation after her death. Admittedly, I struggled when reading the first book. It was like reading an imitation of the character I love. I soon realized, however, that once I separated it from Christie's "voice", so to speak, I was able to enjoy both the puzzle and the approach to the character. I must also give credit to Sophie Hannah for coming up with the ingenious idea to fill in a "gap" in the Poirot timeline, 1928-1932. That makes it easier for nitpickety fans like myself to enjoy the novels. Sophie has written The Monogram Murders (2014), Closed Casket (2016), The Mystery of Three Quarters (2018) and The Killings at Kingfisher Hill (2020) so far.

Of all the projects that have appeared over the years, this is by far the most peculiar. I was very intrigued, but also baffled, by the announcement that a present-day television series with Agatha Christie's Ariadne Oliver's Swedish-speaking Finnish detective Sven Hjerson was in development. I just couldn't figure out how they would do it. But as a Norwegian, I was delighted that an attempt at a Nordic Christie was happening. Having watched it, I can safely say it is a thoroughly unique project. It has very little to do with Christie - I mean, how could it, given that almost no source material exists? But they have faithfully incorporated every character trait that Christie ever gave Sven Hjerson with some minor exceptions (they switched out Sibelius for some jazz music, for instance). The present-day setting works well, too. It has some of the same qualities as Knives Out, with a vaguely 70s inspired look. If it gets a second series, I will be excited to see where it leads.

In the 2014 post, I mentioned that I was expecting a television series based on the early years of Poirot, as a police officer in Belgium. Well, instead we got this detective and adventure game for PC, Xbox, PlayStation and Nintendo. I am not a gamer, so I will have to refer you to the sales pitch: "For the very first time, players will discover a new aspect of Hercule Poirot’s life that has never before been explored, as they experience one of his first cases as a young police officer and detective in pre-war Belgium. The development team has created an intriguing new and original adventure that builds on the familiar world and iconic character created by best-selling crime writer Agatha Christie. Fans of the Queen of Crime’s work will easily identify key elements from her stories, from Poirot’s ‘little grey cells’ to the intricate plotting of the game, and in the story’s satisfying, unexpected conclusion."

Overall thoughts - and what to expect next

I think it is safe to say that we have entered a new era of Christie. Whether the Christie estate is successful in their attempt to 'introduce Poirot to a new generation' is too early to say. Overall, though, I think they have made some really interesting - and at times, daring - attempts at keeping Christie relevant in an ever-evolving world. There is obviously a great deal of respect for her creations underlying much of the development. Some pitfalls have been unavoidable though (hello, Partners in Crime), and some attempts at backstory development are just baffling (hi, Murder on the Orient Express and The ABC Murders). But other attempts have been very successful (cheers, And Then There Were None and Agatha Christie's Hjerson), and the Sophie Hannah novels are obviously a commercial success. So I think it is important for fans like myself to be supportive of the vast majority of decisions that are made, while at the same time being vocal about changes that completely undermine the legacy. Hopefully, we will have more reason to cheer than to raise a Twitter storm in coming years....

Some upcoming adaptations have already been announced. I have mentioned Death on the Nile. Also in the pipeline is Why Didn't They Ask Evans?, an adaptation I for one am very much looking forward to. The mini-series has been written and directed by Hugh Laurie, who also stars in it. Some possible projects are in development, such as adaptations of Endless Night, They Came to Baghdad and Witness for the Prosecution. We'll see what the future brings.


Hi everyone. It has been a while. The last post on this blog was in July 2015. A lot has happened since then, in the world at large, the world of Agatha Christie, and in my personal life. This blog was - and is - a passion project. It became a hobby during my years as a student. Since then, I haven't had the time to keep it going. However, readers from all over the world have kept sending me comments, e-mails and Twitter DMs, which I am somewhat amazed by and incredibly grateful for. Thank you. I have tried my best to get back to all of you. If I haven't responded to your message, I apologize. I get the impression that the blog has become exactly what I intended it for: a source of information and discussion for all fans of the TV series. I have also noticed that several of you have used my episode-by-episode posts as a handy tool when watching or re-watching the series during the ongoing Covid-19 pandemic. I could not have asked for more.

One of you pointed out to me recently that we are approaching the 10-year anniversary of this blog. Difficult to believe, at least to me, but it is absolutely true. I first published a post in April 2012. Encouraged by all the positive feedback over the years, and with the anniversary giving me the perfect excuse, I will be "resurrecting" the blog, at least temporarily. I will be adding a couple of new posts on topics you have suggested over the years. Stay tuned.

View my complete profile
This blog is a spin-off from poirotchronology.blogspot.com and will deal with all aspects of the television series Agatha Christie's Poirot.